American Flori Roberts was the first to develop a line of cosmetics for women of color in 1965, available in major American department stores. Before Flori Roberts, African American women had to mix and match foundation and powder colors in order to achieve a suitable shade. Yet, since these colors were not formulated for darker skin tones, blending them often gave the skin a chalky, gray overcast. Because the Flori Roberts formulations were precisely designed to match the skin pigmentation of African-American women, the result was a diverse cosmetic line with a variety of natural looking shades for African-American women.

Today the brand has lost none of its appeal. Flori Roberts has a comprehensive range of quality color cosmetics that include foundations, face powders, blush, eye and lip makeup that will make you feel great.

The brand is also synonymous with serious skin care and recently launched the first-ever skin care, Enlighten, using Emblica (a plant extract) which is a dramatically effective and natural way to even-out skin tone, fade discolorations and brighten the skin.

Its cutting edge mindset has kept Flori Roberts on the technological fast-track for over 50 years. The latest, highly pigmented, mineral eyeshadow performs miracles for colored skin and the luxurious lipsticks lift your glamor content in no time at top level.
Billie Blair, one of the first African-American supermodels was a fan right from the start. Also the actors from the television series Grey's Anatomy use Flori Roberts make up. And they look great, right? 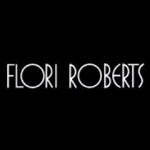 This rich cream to powder foundation gives light to full coverage for all ranges of black skin. Easy to blend, light as a feather.

This oil-absorbing, lightweight formula keeps your makeup looking fresh and matte for hours. It can be worn alone, or be the finishing touch to makeup to keep it looking fresher longer.

Uses Emblica, an herbal extract that naturally brightens and dramatically evens out skin tone while simultaneously defying the effects of aging.

An energizing creamy cleanser that will maintain your skin's moisture balance while revealing softer, smoother and brighter skin.

Refines the skin's texture by gently, but effectively, sloughing away dead, dull surface skin cells and exposing smoother and more perfect skin. Can be used as both an exfoliator and a treatment mask.

Our soft, easy blend brow powder formula helps you shape and contour your eyebrows and will help you achieve that perfect, natural looking brow line.

This concealer smoothes on, covering dark circles, and tiny imperfections. It has a matte finish.

This lightweight primer completely controls oil to give you a beautiful, shine-free finish.